Psoriasis is one of the most common skin problems that people suffer This skin problem occurs due to a defective immune system. The skin cells are forced to develop on the surface of the skin forcing them to form scales or red patches which are itchy and painful also.

Although the actual cause is unknown, it is often believed that a combination of elements that leads to this health condition. Psoriasis is basically an auto immune disease where excess of skin cells is caused by the inflammatory chemicals which are produced by T-cells that are specialized white blood cells. The T cells in general travel through the body for defending it against foreign substances but due to the defect in the immune system of the body the T cells attack the healthy cells of the skin as if to fight an infection or heal a wound. 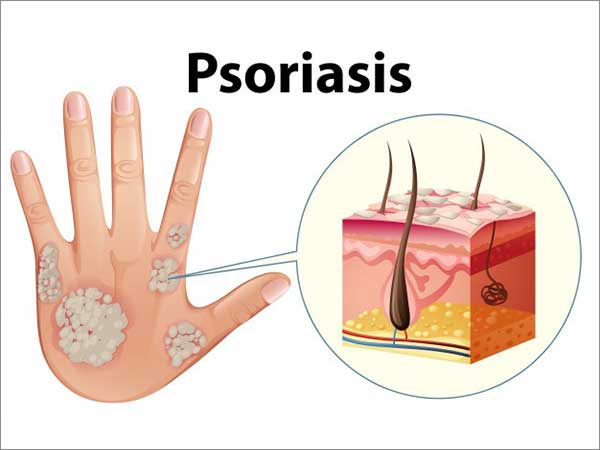 These overactive T cells also promotes an increased production of healthy skin cells, T cells and other white blood cells particularly the neutrophils. These cells them travel into the skin causing the skin to redden and at times pus also develops in the pustular lesions. This process of formation of new skin cells continue where the new skin cells very quickly move to the outermost layer of the skin in very quick time which results in skin cells building up thick and in scaly patches on the surface of the skin. This ongoing cycle causes psoriasis until a treatment takes place. Now, the reason for malfunctioning of the T cells is not completely clear. Researches reveal that a combination of genetic as well as environmental factors play a crucial role. Some of the major factors that trigger psoriasis are as follows.

Psoriasis affects almost all parts of the body but It commonly affects the skin around the elbows, scalp and knees. The signs and symptoms of psoriasis differ from person to person. Some of the common symptoms of this skin disease are as follows.

In most of the cases of psoriasis, the diagnosis of the condition is quite a straightforward one. The doctors usually begin with a physical examination by checking the skin thoroughly along with the nails and scalp. The doctors also collect information about the medical history of the affected individual along with an enquiry about the family history of psoriasis. In some cases, lab tests are required to be performed in order to know the depth of the condition where a skin biopsy is done. A small sample of skin in taken and examined in order to diagnose the exact type of psoriasis and ruling out the other conditions of the skin.

Psoriasis being an auto immune disease is not completely curable but with effective treatment procedures the skin disease can be kept under control. The homeopathic treatment of psoriasis tries to relieve the affected individuals in easing the symptoms and thus keeping the disease in control. As homeopathic medicines are made from natural ingredients, there is almost no no side-effects yet they are quite effective in treating the same. In the case of Psoriasis, what homeopathy does is it focuses on the cause of a problem and intends to correct the cause that has triggered the cell division and also the skin inflammation. Once this is accomplished, the symptoms begin to vanish and the skin starts to look normal.

Treatments in homeopathy may not show overnight results but in the long run will make you healthier and rejuvenated.

Few effective homeopathic medicines which are quite effective for the condition of Psoriasis are as listed below.